Working with one of the world’s most respected charities

Cancer Research UK (CRUK) is the world’s largest independent cancer charity. The organisation funds 4,000 researchers, doctors and nurses and more than 200 clinical trials. In the 2020/21 financial year, CRUK provided £421 million of funding for research into 200 different types of cancer. This remarkably successful charity operates research institutes in Beatson, Manchester and Cambridge. We were tasked with creating a 360 virtual tour of the CRUK’s Cambridge Institute. 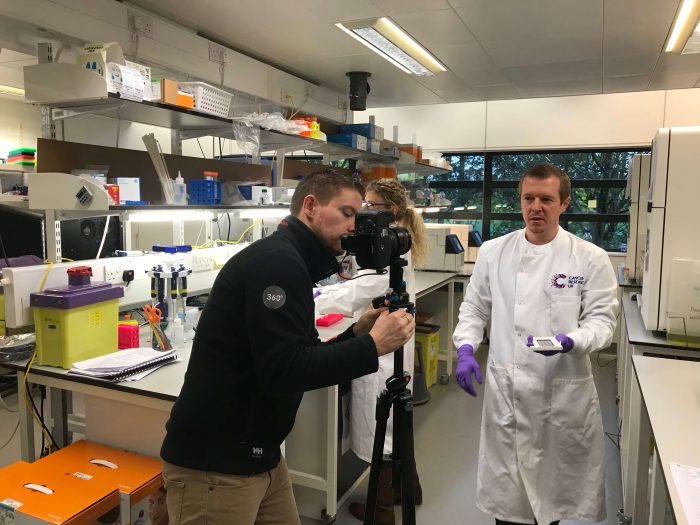 The scope, scale and complexity of CRUK’s research mean it’s a challenge for the charity to accurately represent the value of their work in ways individuals can relate to. However, as an organisation that depends on donations, doing so is essential. CRUK receives a more positive response from donors if they produce information that’s relatively easy to digest and that clearly demonstrates donations are put to good use.

The team at the Cambridge Institute wanted to show the journey of a cell sample through the ward, moving from endoscopy to data analysis and covering everything in-between. In the past, this kind of story has been published in written form, using photos and videos to illustrate the process. CRUK wanted to take this a step further and produce an interactive story that carried more impact and generated greater interest.

The first stage of the process involved discussing the project aims with CRUK to ensure we were both working towards the same well-defined goals. A vital aspect of this early work was identifying the areas of the journey that needed capturing and integrating into the virtual tour. Once agreed, the principal information points were selected.

Information points are an essential interactive element within our tours. They contain key facts about specific spaces or the processes that take place in those spaces. The way these information points link together affects the user journey and experience, so careful planning and close collaboration with CRUK were essential.

The second phase involved one of our photographers visiting the site and working alongside CRUK’s on-site team to assess operational needs. As we were working within a functioning lab, we wanted to ensure little to no disruption to standard lab services. This meant planning our shoots meticulously so that each area was photographed within a matter of minutes.

Once the on-site photography was complete, each 360 image was run through several editing processes at the 360 Virtual Tours office. This included removing tripod shadows, reflections and inconsistencies and verifying there was no sensitive information on display in any of the photographs. Finally, the tour skin was created using colours, fonts and styles from CRUK’s official brand guidelines, ensuring it complemented their website and marketing content.

Each 360 scene contained several information points. Typically, this was organised so that a central point provided a general overview of the surrounding space. This would be supplemented by more minor information points that offered more detailed descriptions of the specific processes that took place within that area. To assist with navigation, the points were numbered, and we devised a unique icon system that ensured users could easily distinguish between the various types of information points.

A finished product that helps CRUK explain the work they do

The completed tour gives CRUK an interactive, engaging and interesting means of explaining the work they do. By describing a cell sample’s journey and explaining what goes on in the labs, the tour takes the abstract aspects of academic research and locates them within a real, concrete space. It allows users to understand how their money makes a difference in a far more relatable and digestible way.

Engagement with the resource is considerably higher because the user controls what they see and where they go. Rather than being a passive, uninterested user, they’re an active, engaged user who is responsible for exploring the space they’re presented with. This is reflected in the way users generally spend far longer interacting with a virtual tour than they do watching a video or reading an article.